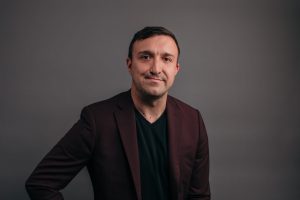 Matt Cook is an arts leader and artist in Los Angeles, California. He has successfully managed small to mid-sized performing arts organizations with a goal to create conversations and connections with the communities they serve. In the dance field as a producer and artist, he has worked with Martha Graham Dance Company, Akram Khan Company, Heidi Duckler Dance, and several others.

Matt comes to Blue13’s executive leadership role following a successful tenure as Executive Director of the Pacific Opera Project. At POP, he established POP’s first community engagement department which is now a resident in 15 Title-1 classrooms. Matt also produced meaningful social justice work including the west-coast premiere of “I Can’t Breathe” which highlights stories from black voices speaking out against police violence. Since 2019, Matt nearly tripled the operating budget of the company through successful fundraising efforts and marketing strategies. Matt led the employment transition of the company through California’s AB-5 law and produced more opera during the pandemic (2020-2021) than any other company in the country.

Previously, Matt has held positions in development and production with Wild Up New Music ensemble. There, he was responsible for overseeing operations for all events and fundraising activities. Matt produced performances at the Los Angeles Philharmonic’s Fluxus Festival, the Ecstatic Music Festival in New York City, and led partnerships with organizations such as the Martha Graham Dance Company. From 2008-2016, Matt worked with the Los Angeles Percussion Quartet in various roles as Managing Director, Project Manager, and Marketing Manager, leading the organization to international recognition in their field.

Matt is also a Grammy Award® winning performer and 5x nominee. His work is heard on studio and film recordings such as Aquaman and various Netflix series, and has been seen live in performance with ensembles across the world. As an educator, Matt has been a featured clinician at institutions including Stanford, Colburn, and The San Francisco Conservatory of Music. He is on faculty at Fullerton College (Fullerton, CA). A native of Atlanta, Georgia, Matt holds a BA from the Oberlin Conservatory of Music, an MFA from the California Institute of the Arts, and a certificate in Marketing Strategy from Cornell University.